The main focus of our research group is the on first principle computational studies of the electronic structures for a variety of materials and their associated properties. Through a Memorandum of Agreement, we collaborate very closely with the Muon Spin Rotation (µSR) experimental group at RIKEN Japan. Currently there are two main areas of interest, Material Science and Life Science. These include the following:

We employ the ab initio Hartee-Fock as well as the Density Functional Theory computational method to study the systems of interest including their electronic structures, antiferromagnetic (AFM) long range magnetic ordering and impurity centers including muon site determination. As for the computational resources, we use the Hokusai Great Wave Supercomputing Facilities under the computational grant provided by RIKEN Advanced Center for Computing and Communication.

In the area of Life Science, we are working on a project under the USM-RIKEN International Center of Ageing Science (URICAS) to study electron transport behavior in DNA/RNA using Muon Spin Relaxation technique.

Our main collaborator in the Advanced Meson Science Laboratory at RIKEN Nishina Center Japan operates the muon facility at the Rutherford Appleton Laboratory in the United Kingdom. Currently two PhD students in our group are stationed at RIKEN Nishina Center as the International Program Associates to conduct their research both using µSR experimental method and band structure calculation.

Me4P[Pd(dmit)2]2is an organic magnet with antiferromagnetic ordering. The magnetic structure is unknown. µSR experiment indicates the long range magnetic ordering occurs at around 38 K and that there are three muon sites. DFT computational technique is employed to determine the ground state electronic structure and possible electron spin configurations in the AFM state. 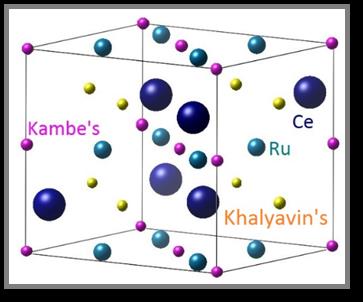 Muon Spin Rotation Studies on the Magnetic State of Ce(Ru,Rh)2Al10

Ce-based caged-type compounds, CeT2Al10 (T=Ru,Os) have generated great interest due to the Kondo semiconducting state and anomalously high magnetic ordering temperature T0~30 K with  spin gap formation at low temperatures. In order to study the relation between the magnetic moment direction and the spin gap, we perform µSR experiment on the La doped system. In parallel, we use DFT method to estimate the muon sites and to determine the magnetic structure of Ce1-xLax(Ru,Os)2Al10.

Studies on the Muon Sites and Magnetic State of YBa2Cu3O6

The high-Tccuprate superconductor YBa2Cu3O6+x (YBCO) compound is Mott insulator and remain arguably until now. The electromagnetic properties can be controlled by the oxygen content, x. In the range of 0 ≤ x ≤ 0.4, YBCO is in the antiferromagnetic (AFM) ordered state below room temperature. As x increases further, the AFM ordered state disappears and the superconducting state appears for x ≥ 4. µSR experiment revealed there is a long range magnetic ordered state when the oxygen content, x ~ 0. In order to understand the µSR results we use Density Functional Theory (DFT) method to determine the muon sites and to compute the electronic structure of YBa2Cu3O6.

Isostructuralcation radical salts of k-(BEDT-TTF)2Cu[N(CN)2]Cl is very intriguing because  the properties are tunable with respect to lattice parameters and this compound is also an organic magnet with potential application in spintronics. DFT methods will be employed to calculate the electronic structures and the muon hyperfine coupling constants. This study also will observed the type of magnetism exist in this compound and will computationally prove that the AFM configuration is the ground state of k-Cl.

Electron Transport Studies in Biological Molecules with respect to the Science of Ageing.

Electron transport in biological molecules like DNA is an important aspect in the science of ageing. Muon Spin Relaxation (µSR) technique provides a means to study such phenomena at the microscopic level where electron motion can be probed. Damages in DNA would lead to various types of diseases such as cancers and neurological disorders. There is a direct relationship between damages in DNA and ageing. It is anticipated that damages in the DNA would alter the behavior of electron motion. A systematic study of the electron transport in different forms of perfect and damaged DNA is essential to understand the effects of damage in DNA to the topology of electron transport and their relationship to ageing. This research is divided into two parts, first is the experimental part using Muon Spin Relaxation (µSR) measurement to study the topology of electron transport whereas the second part is computational studies using the first principal method to study the muon location.

DNA store genetic information that consists of two polynucleotide chain twisted around each other in the form of a double helix. Electron transport in DNA considers as important biological phenomena and has relation with ageing. The process of electron transfer is the movement of charger from one molecule to another molecule. There are two mechanisms for electron transport namely tunneling and hopping. This DNA structure is suitable for electron transfer because some of the electron orbital belong to the bases overlap quite well with each other along the DNA long. Muon spins relaxation method offer great potential in biological macromolecule study. The electron transport in DNA can be trace by introduce an electron and electron observer. The Density Function Theory methodology will be employed to study the electronic structure of the host environment and the muonated system.

Styrene is a type of monocyclic alkenyl aromatic organic compound with the chemical formula C8H8 but having a structural formula of C6H5CH=CH2.  MuSR experiments have been carried out but the location of the muonium in these compounds cannot be determined. Hence, computational studies on these muoniated compounds are currently been carried out, using Density Functional Theory (DFT), to determine the most probable location of the muonium and to study the electronic structures of the compounds.

Ketones are simple organic compounds containing C=O with two hydrocarbon groups attached to the carbonyl C. MuSR experimental studies on ketones with phenyl group substituent have shown that there was was a correlation between the hyperfine coupling constant of the muonium and the vibrational frequency of the C=O bond.  However, MuSR cannot provide the information on the location of the muonium in the compounds. My work involves performing computational calculations by using Density Functional Theory (DFT) to determine the most probable location of the muonium and to study the electronic structures of the muoniated ketones.

There is indication that hydrogen impurity centers are responsible for the n-type conductivity in ZnO. Muon implantation into ZnO is a perfect method to study hydrogen centers in ZnO because the implantation does not induce any unintended damage to the lattice and the muon impurity center is very dilute. µSR experiment indicates that there are two muonium sites in ZnO. DFT with ONIOM method is applied to determine stable muonium sites in ZnO and the associated hyperfine interactions.

Electron transport through DNA is vital process of life science because there are indications that these processes have a relationship with theory of ageing. The DNA damage theory of ageing states that ageing is a result of unrepaired accumulation of naturally occurring DNA damages. There are certain types of cells, mainly in non-replicating or slowly replicating cells, such as cells in the brain, cardiac and skeletal muscle which the accumulation of unrepaired DNA damage has commonly happened. Studies of electron transport in DNA at the microscopic level through muon spin relaxation techniques have given a new viewpoint in the understanding of ageing. The main objective of this research is to characterize electron transfer process in DNA from samples of various age classes.

Pioneering studies have shown that almost all existing information on electron transfer have been obtained using macroscopic methods. Thus, it is important to use a method that provides information at the microscopic level to understand the details of electron transfer. The electron transfer process in biologically important molecules such as DNA is important as there are the indications that they are eventually related to the ageing process. The DNA is basically made up of phosphate, sugar and bases (A-Adenine, G- Guanine, C-Cytosine, T-Thymine). In recent work, they have found a possible electron transport between guanine bases, and this finding has accelerated both experimental and theoretical studies. This research involve using muon spin rotation/relaxation/resonance (µSR) methods which directly help to observe the microscopic aspects of electron transfer, and followed by the computational studies using the Density Functional Theory.